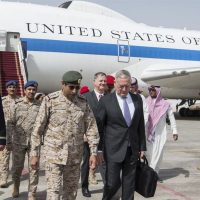 Should the Murder of Jamal Khashoggi Cause the Retrenchment of Our Entire Middle Eastern Policy?

Attempting to grasp the whole of the Middle East through western eyes is seldom successful and almost never useful. It is even more problematic when a single event such as the murder of Jamal Khashoggi is touted as the reason to rethink our entire Middle East policy.

Nonetheless Greg Treverton, in his article “Time to Retrench in the Middle East?,” does just that. He uses the Saudi Arabian citizen and Washington Post journalist Jamal Khashoggi’s murder in the Saudi Consulate in Istanbul, Turkey by Saudi government operatives, to call into question the US foreign policy from Afghanistan to Iran, from Yemen to Iraq and from Turkey to Israel. That is after all most of the Middle East.

Realistically, despite the abhorrent murder of Mr. Khashoggi, this event does not rise to the importance of the dangerously wrong September 2015 “Joint Cooperative Plan of Action’ with Iran or the 1916 Sykes-Picot Agreement between the United Kingdom and France defining spheres of influence in “Southwestern Asia” the consequences of which we are living with today.

The irony arising from the outrage and invective focused on the Saudi Crown Prince , Mohammed bin Sultan, is that since the Kingdom of Saudi Arabia (KSA) came to be on September 23, 1932 the western world has seen KSA as a repressive theocratic monarchy, the ultimate rentier state, enriching only the royal family. Enter Muhammad bin Salman, the new Crown Prince, chosen by his father King Salman bin Abdulaziz al Saud as next in line to be king and the de facto leader of Saudi Arabia.

The Crown Prince began a series of reforms that the rest of the world has been calling for. He has implemented broad economic and social changes. He has started a move away from oil as the primary source of revenue and has partially privatized the state oil company, Saudi Aramco. He is diversifying rapidly into non-oil sources of revenue and working to develop Saudi Arabian domestic industries. He has been leading the boycotting of Qatar for its ties to terrorism. Being against terrorism seems like a good thing.

In June of this year “MBS,” as he is known, lifted the ban on women drivers. In July he initiated a wide ranging anti-corruption campaign. All of these initiatives are reforms that the west has been wanting. Despite these reforms, Greg opines that the Khashoggi murder will be the Crown Prince’s undoing. I suggest this will not happen and this notion is an artifact of seeing the world through a western lens.

In Robin Wright’s article in the New Yorker, “Can Saudi Arabia’s Crown Prince, Mohammed bin Salman, Survive the Jamal Khashoggi Murder?,” Prince Turki al-Faisal, the former Saudi ambassador to the United States is quoted telling David Ignatius of the Washington Post, “The more [foreign] criticism there is of the crown prince, the more popular he is in the kingdom.”

This is neither to say the Khashoggi murder will not have repercussions inside the Kingdom, nor that the young crown prince (he is 33) should not be strongly counseled to act far more responsibly in the international arena.

As Wright explains, there are four possible outcomes. The first is that the international apoplexy will, over time, dissipate and MBS will retain and strengthen his position continuing his program of reforms. Before the murder, MBS was extremely popular with younger Saudis.

A second outcome could be that the Crown Prince is simply replaced. To make MBS crown prince, King Salman dismissed Crown Prince Muqrin, one of the last offspring of the kingdom’s founder and Prince Mohammed bin Nayef, former Interior Minister. Replacing MBS would have to be the result of a significant amount of palace intrigue to become reality. A coalition of the royal family would have to develop and, according to Gregory Gause, an expert on Saudi Arabia at Bush School of Government, “I haven’t seen any public evidence—as in the past incidents—of an intra-family dispute. Although many don’t like him, they don’t have the ability to get together to stop him.”

A third scenario would be for the king to reduce MBS’ influence and areas of responsibility and identify others to take some of his current positions. MBS may, as time goes on, lose the opportunity to ascend to the kingship.

Lastly, it is entirely possible, although very unlikely, that MBS could be assassinated as was Saudi King Faisal in 1975. Most scholars believe this is the least likely scenario.

What cannot be denied is that Saudi Arabia continues to be the world’s largest oil exporter and the largest developed reserve for future oil supplies. And, at the moment, MBS is the only person whose strength of personality is apparently sufficient to guide the kingdom’s role in the larger Middle East dynamic including Saudi Arabia’s impact on Syria, Lebanon and Egypt.

As for the United States, a $110B weapons deal (I couldn’t find a reference to the figure $500B Greg says President Trump claims) signed in May 2017 is important and should be disconnected from the outcome of the investigation into the killing Jamal Khashoggi. That is because we should neither tolerate Khashoggi’s murder nor raise that event above our strategic interests in the Middle East.

The Defense Security Cooperation Agency, the Department of Defense agency responsible for managing all US foreign military sales and overseeing direct commercial sales between US defense companies and foreign governments confirms in a 20 May 2017 news release, “President Trump and Saudi King Salman signed a nearly $110 billion defense capabilities package in a significant expansion of more than seven-decade long security relationship between the United States and the Kingdom of Saudi Arabia.” Suggestions, that the sales were much lower on the order of only $4B are simply inaccurate. Saudi Arabia signed one contract alone for $29B for 84 F-15s in 2018, again according to DSCA, the agency that manages these sales.

It is a fact that the most of the 9-11 Islamic terrorists were Saudis. But there is no proof that the Saudi government helped plan or participated in that attack. Since the 1980-1988 Iran-Iraq war, Iran has been the number one state sponsor of global terrorism. A significant number of improvised explosive devices that have killed or injured American and allied soldiers in Iraq, Afghanistan and Syria were manufactured in Iran, not Saudi Arabia.

The National Defense Strategy correctly identifies Iran as the number one sponsor of global terrorism, not Saudi Arabia. I spent time in Saudi Arabia during Desert Shield/Desert Storm and have some idea of the religious and cultural behaviors that westerners find unsettling and objectionable. However, it would never occur to me to equate a single incident that involved Saudi Arabia with how the United States should rethink or as Greg put it “retrench” its foreign policy for the “Middle East.”

There are many defects in our Middle East policy. Nevertheless, because of its opposition to Iran’s aggression, Saudi Arabia remains an important tool in our overall strategy. It must remain so for the foreseeable future.