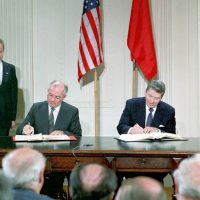 Two Cheers for the INF Treaty

President Trump’s decision to withdraw from the Intermediate Nuclear Forces (INF) treaty is not a disaster but is a mistake. To be sure, the strategic context is very different now that when the treaty was negotiated, in the late Cold War. Most obviously, NATO no longer fears—and so no longer needs nuclear weapons to deter—a massive Red Army attack aimed at occupying Western Europe. Rather, the mischief Moscow makes now is hybrid interventions short of kinetic war, like the one during the 2016 U.S. elections. For those, nuclear weapons are no deterrent. Indeed, the worst outcome that might ensue from pulling out of the treaty would be luring the United States into an arms race in weapons for which it has no need.

I confess to being one of the godfathers of the INF issue. When I left the Carter Administration in 1979, I spent several months trying to convince Foreign Affairs that the issue merited an article. No need to rehearse the strategic theology of the Cold War, but the Soviet SS‑20 missiles, modern and being deployed in numbers, had range enough to hold western Europe hostage. NATO needed counters, not in any warfighting sense, but for fear that trying to deter the SS‑20 threat to Europe with threats of attacks from American intercontinental-range ballistic missiles based in the United States would not be credible. NATO was missing a “rung” in the ladder of escalation, for its only system like the SS‑20 was the Pershing I, with only a quarter the range of the SS‑20.

Ronald Reagan deserves high marks for the INF treaty. In the arms control realm, he is usually remembered for “trust but verify,” but more important to me was his “zero option”—no INF on either side. What struck me then and still strikes me is that none of us analysts would have proposed “zero”: it simply wasn’t respectable. Moscow had SS‑20s while NATO had only aspirations, to upgrade the Pershings and to deploy new ground-launched cruise missiles (GLCMs, or “glickems”) in Europe. Trouble was, Europeans were deeply divided over the plan, with large protests against the deployments all over Europe. Why Mikhail Gorbachev said yes to “no” INF remains one of the puzzles of his curious role in the ending of the Cold War. But he did, and the result was the treated that banned ground-launched missiles with ranges between 500 and 5,500 kilometers—a singular achievement in the Cold War.

Yet, a happy surprise in the late Cold War does not necessarily equate to a good idea now. Despite the apparent Soviet violation of the treaty with the deployment of what NATO labels the SSC‑8, with a range of perhaps 2,000 km, it probably would have made better sense to keep the conversation going; “Meeting jaw to jaw is better than war,” as British Prime Minister Sir Winston Churchill put it. Indeed, artful diplomacy might, just might, lead to another happy outcome, though not immediately.

Russia cannot credibly threaten Western Europe with nuclear weapons, and so its offending GLCM probably is driven more by concerns about China. Its deployments will also be constrained by Russia’s deepening economic straits. For its part, China is probably already producing as many missiles as it can. If the United States seeks to target Chinese command posts, air-defense radars and missile launchers, it will do so with precise conventional missiles. More to point, for that purpose is has no need to develop a new generation of GLCMs, for it has a range of options from ships, submarines, and aircraft, all more survivable than ground-launched systems. Moreover, where would those ground systems be based? To suggest American bases in Asian allies is only to guarantee a repeat of those European protest marches in the 1970s. To impose great pain on allies and alliances in Asia for no real gain makes no sense.

Trump backed into the right strategic logic when he said, “we are going to have develop these missiles, unless China and Russia come to us and they all come to us and say, ‘Let’s really get smart, and let’s none of us develop these weapons.’ I would be extremely happy with that.” Having a place for them to come, like the INF treaty, would not be a bad idea.