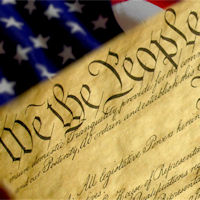 As part of SMA’s initiative to reflect on political, social, defense and cultural issues of our times, we thought it would be useful to publish opinion articles to address these issues. Many of the issues that we will raise have constituents with decidedly different points of view; often polar opposite perspectives. Consequently, Dr. Gregory Treverton and I have been asked to write point-counterpoint articles where one of us will take a position on a subject and the other takes an opposing view. Greg is first with his article “What Will Follow the First American Republic?” You can read my response here.

After the Fourth of July is perhaps as good a time as any to reflect on the ending of the first American republic and to reflect on what may come next. Historians remind us that today looks a lot like the last third of the nineteenth century in its economic uncertainty, corruption, and government dysfunction. Some aspects of our current travails do seem unique to Trump and will pass on when he goes. We haven’t, for instance, seen kleptocracy on Trump’s scale for a long time, with the President governing as though his main aim is enriching himself, his family and his cronies. We used to joke in Washington about leaks of secrets that the ship of state was like no other, for it leaked only at the top. So far the Trump administration steals mostly at the top.

So, it would be unwise to rule out an American renewal. But it also be wise not to count on it.

I had the honor, while chairing the U.S. National Intelligence Council, to preside over the preparation of Global Trends, the Council’s every four-year look into the future. Months before Trump’s nomination I was talking with an MIT colleague who asked if we were taking the red-blue division of America seriously. I said I thought so. He said, no really, if you’re looking twenty years out don’t you have to take seriously the possibility that the country will physically come apart. That has become my benchmark for thinking about the future, and it seems less improbable than it did three years ago.

Alas, we know all too well what will come immediately next: more of the same. Trump has played on division and gridlock for his own advantage. Indeed, other than kleptocracy, the best frame for understanding his administration might be called “self-sabotage”—willfully disrupting government functions in the short run to make the long-term ideological argument for smaller government. But he didn’t create gridlock or division, and neither is going away soon.

So, whatever the election results, “winner take all” politics will continue, with both parties seeking to reverse policies put in place by the other. So, too, the guerrilla war, one mostly fought in the courts, between states and the federal government will continue. Only the issues of litigation will change—from abortion and affirmative action when the president is a Democrat and the red states sue, to immigration and climate change when the president is a Republican and the blue states sue.

In the process, American civil culture will continue to debase, as arguments become shriller and “facts” more and more a matter of choice. America will agree on little besides defense spending. The nation will look less and less like a model for anyone, and its authority in the world will recede to what it can accomplish through force of arms.

What might follow the end of the first American republic? Perhaps the historians, especially Walter Russell Mead, will turn out to be right: just as the dysfunction in the last third of the nineteenth century masked the beginning of the country’s adjustment to the Industrial Revolution, so too this period may be the same for the Information Revolution—to use a title that is clichéd almost into meaninglessness.[1] In 1850, 64 percent of Americans earned their living through farming, a number that had fallen almost by half by 1900 (and today is two percent). In our period, as recently as 1980, manufacturing and clerical accounted for half of all American jobs; by 2016 they accounted for but 15 percent.

The dislocations were and will be enormous. Then, too, job losses were visible and jarring, while those that would be created were invisible. That was most obvious in agriculture, but skilled artisans too were displaced by factory workers, and in the process income inequality grew. Now, Trump’s supporters seem not to notice, or do not care, that from taxes to tariffs, his policies have hurt, not helped them. Their sense of grievance will only be deepened by other trends afoot, like the next phases of automation, which will do grand things but also grandly disrupt job markets.

Then and perhaps now, existing practices, if not institutions, were mismatched to the emerging era. Then, government was too weak and badly organized to cope with the emerging challenges. And even the historical success story is cautionary: it took almost a century, and both the New Deal and World War II, to complete the adjustment. It was only after the war that the country completed the process of failing to success, in Mead’s wonderful phrase. Only then, and until about 1990, did the country have the stability of what so many now regard as the “good old days”: vibrant but regulated capitalism, including some regulated monopolies, a decent safety net, many people employed by large firms with good benefits and rising salaries. The expectation that the next generation would be better off than this one was a reality—of course not for everyone but for the bulk of the population.

The IT revolution, along with globalization, have upset those expectations, and we now seem in another period when existing practices and institutions are ill-matched to the challenges of the next era. That is perhaps most visible in debates about the web and privacy. There, the paradoxes abound: perhaps the most vibrant part of the American economy eludes traditional regulation because it moves so fast. And those charged with making policy are often clueless: witness the senators who questioned Facebook’s Mark Zuckerberg in mid-2018, who plainly were ignorant of basics about the systems they were discussing.

Or take trade. The increasing globalization of supply chains, notably in North America, makes tariffs risky because of so many unintended consequences, and means that trade wars are only a recipe for impoverishment. At home, the country has never done well at adjustment assistance for those put out of work by globalization. It is hardly prepared for the disruptions that Artificial Intelligence (AI) will set loose, all in the context of growing inequality in income.

Perhaps in twenty years, or fifty, Americans will take for granted products they buy and services they receive that seem unimaginable today, just as Americans in 1870 could hardly have imagined what life would be like, at least in cities, in 1940—electric lights, not candles; flush toilets, not outhouses; cars and trains, not horses. Perhaps, but the pessimists’ case is worth pondering.

It is best made by an economist, Robert Gordon.[2] For him, the consequential period was the same near-century as for Mead, and the process was slow. But for him, the great technological advances—electricity, urban sanitation, chemicals and pharmaceuticals, the internal combustion engine and modern communication—were products of the nineteenth century, then refined in the twentieth. Those produced a one-time period of strong economic growth, from 1920 to 1970. For him, IT is more a blip than a revolution.

In that view, the second American republic will indeed be more of the same. Growth will be stagnant not only because technological progress has slowed, but because of “headwinds” like growing inequality, plateauing of education levels, and aging population. In those circumstances, it is all too easy to imagine America’s current gridlock and government dysfunction continuing for a long time.

We can be confident of one thing: the second American republic will not look like the first if World War II’s end to 1990 is so is taken as the flowering of the first. The role of the government will be less—and different. America is an outlier: we spend about 27 percent of our GDP on local, state, and federal government, while most of our fellow industrial democracies spend 7 to 10 points more. And America is an outlier in another way as well: most countries spend more on their government as they get richer, with citizens demanding more and better public services. Yet our number has hardly changed in fifty years, while, again, our fellow democracies have expanded government by about ten percentage points over that period.

So, the optimists’ case for the second American republic rests on the private sector, and new forms of collaboration across what we now too easily call “public” and “private.” When the Gates Foundation spends more on health in Africa than the World Health Organization, we know that the IT revolution has outmoded our notions of public and private. Indeed, in twenty years even our current use of those terms will seem quaint. The collaborations will span across levels of government, perhaps even across countries as, for instance, California becomes “America” in leading the response to climate change.

We also know that even if Gordon is right that IT, AI and biotech are only modest advances by comparison to earlier ones, still, great fortunes will be made from them. Perhaps the second American republic will find ways to harness that money for the public good. It will not be through the raggedy shards of today’s government safety net; Mead is right about that. It will be new combinations of making money and serving people, of which the recent agreements by metropolitan transit authorities with Uber and Lyft are but tiny foreshadowing.

[2] Robert J. Gordon, The Rise and Fall of American Growth: The U.S. Standard of Living Since the Civil War, Princeton University Press, 2016.